We Work Together, We Grow Together

Our analytics are versatile in their potential applications, from high-security perimeter protection to traffic counting and retail intelligence, we have the capability to provide you with a solution.

Make it work, make it simple, make it affordable

Through our years of experience in analytics we know that many of the false alarms that customers experience can be avoided through simple combinations of existing rules. Using Logical rules, simple zone based detections can be made radically more accurate and informative though evaluation of movement direction, duration and previous actions

Basic Input / Rule: An algorithm that will trigger when a particular behaviour or event has been observed e.g. Presence.

Filter: A filter that will trigger if the object which has triggered the input rule / logical rule fulfills the filter requirements e.g. is moving as a specific speed.

Conditional Input / Logical Rule: A logical link between one or more inputs to allow the detection of more in-depth behaviours e.g. AND 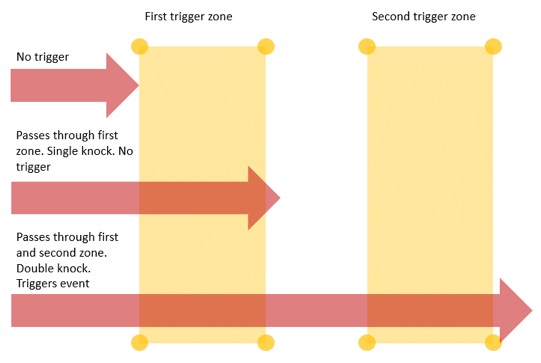 An example of a double knock rule

The ‘double-knock’ logical rule triggers when an object enters a zone which had previously entered another defined, zone within a set period of time. The time interval on the ‘Previous’ rule in the graph decides how much time can elapse between the object entering the first and then second zone. The graph for a double-knock logical rule is as follows:

The rule may be interpreted as follows: ‘An object is in Zone 2, and was previously in Zone 1 in the last 5 seconds. This rule can be used as a robust way to detect entry into an area. Since the object has to enter two zones in a specific order, it has the ability to eliminate false positives that may arise from a simple Presence rule.

Our cameras are used in retail environments to provide a wide range of reports including footfall, heatmaps and customer flow.
Through the use of our cloud-based service uCountit retailers are increasing sales and reducing costs.

We have a long history of providing solutions to traffic and transport related analytics. We can produce live alerts and post event reports for statistical analysis including traffic flow, speed, types of vehicles, illegal actions and counting.

Our cameras are used in retail environments to provide a wide range of reports including footfall, heatmaps and customer flow.
Through the use of our cloud-based service uCountit retailers are increasing sales and reducing costs.